FROM CHALLENGE
TO OPPORTUNITY
Approach 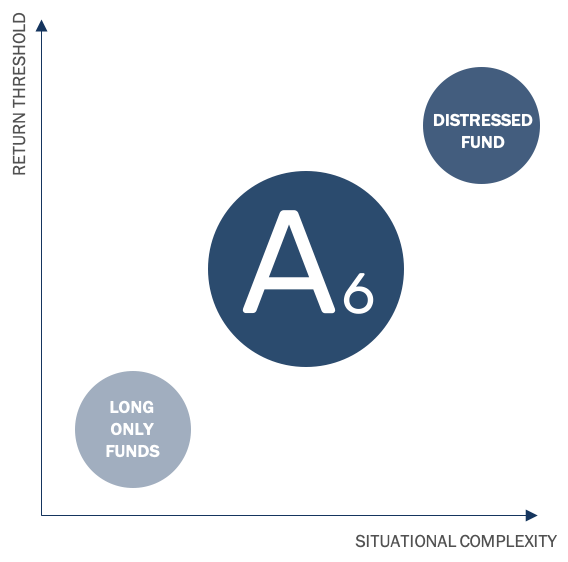 MARKET OPPORTUNITY
A6 CAPITAL
LONG ONLY FUNDS
Why A6?

A differentiated approach to orphaned securities

Prior to founding A6 Capital, Michael was Head of Corporate Credit on the investment team at LibreMax and a member of the investment committee. Prior to joining LibreMax in June 2015, Michael was at Carlson Capital from 2009 to 2015, investing across the capital structure in high yield, stressed and distressed situations, with a primary focus on financial services, real estate related companies, and became Partner in 2013. During 2008 and 2009, Michael worked at Patriarch Partners as a distressed analyst. From 2005 to 2008, Michael was the distressed debt and special situations analyst at Gracie Capital. Prior to 2005, he spent four years at Compass Advisors advising creditor committees and debtors involved in operational restructurings and recapitalizations. Michael began his career at Monitor Consulting Group as a strategy consultant. Michael graduated with Great Distinction from McGill University in 2000, with a Bachelor of Commerce degree, major in Finance and minor in entrepreneurship.

Co-Founder, Head of Research and Trading

Previously, Alexander was a Director of Corporate Credit on the investment team at LibreMax and a member of the investment committee. Prior to joining LibreMax in 2017, Alexander was an Investment Associate at Credit Suisse from 2014 to 2017, initially on the Distressed Credit and Special Situations Desk, later moving to the Credit Investment Group within Credit Suisse Asset Management where he led distressed investing and co-ran restructurings and workouts. From 2013 to 2014, Mr. Brown worked as a Leveraged Finance and Restructuring Investment Banker at Canaccord Genuity and from 2012 to 2013, he worked at ICON Capital as a Direct Lending Investment Analyst. Mr. Brown graduated with a B.A. in Economics, and a minor in Business Studies from New York University in 2012.

Before joining A6, from 2015 to 2020, Jeremy was a Senior Research Analyst at Southpaw Asset Management where he focused on performing, stressed, distressed and special situations investments across a variety of sectors including retail, consumer, media, industrials and business services. Prior to Southpaw, from 2010 to 2015, Jeremy was a Senior Research Analyst at Andalusian Capital Partners where he focused on event-driven, stressed and distressed investments in a generalist capacity. Prior to joining Andalusian, during the Financial Crisis of 2007 to 2009, Jeremy was an Associate at Credit Suisse in the Financial Sponsors Leveraged Finance Group where he focused on executing a variety of debt capital markets transactions including, coercive exchange offers, rescue financings, non-pro rata below par bank loan amendments and regular way LBO financing syndications. From 2005 to 2007, Jeremy earned his MBA from The Wharton School at The University of Pennsylvania. Prior to earning his MBA, Jeremy was an M&A Investment Banking Analyst at Robert W. Baird and Billow Butler and a Private Equity Analyst at Mesirow Financial.  Jeremy earned his BSBA from Washington University in St. Louis in 2000.

Before joining A6, Jenna was Head of Partner Relations at Sunriver Management where she oversaw business development, marketing and investor relations for the firm. Prior to Sunriver, Jenna was Director at Merritt Capital from 2015 to 2018 where she was a member of the firm’s Investment Committee and led both investment and operational diligence on the firm’s investments. Prior to Merritt, Jenna was a consultant at JAT Capital from 2014 to 2015 where she led several firm-wide initiatives in marketing, operations, and technology. Jenna began her career as an equity trader at Needham & Company and subsequently Credit Suisse. Jenna earned a B.S. in Physics from Harvard College in 1995.